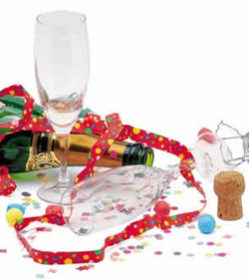 New Years Eve is not a federal holiday in the USA it is a day to celebrate the end of one year and at the stroke of midnight, the beginning of a new year.

To celebrate New Years Eve many Americans conduct parties and invite friends and family to them. Television is very popular on New Years Eve with millions of Americans watching the New Year’s celebrations in Times Square in the heart of New York.

Regardless of where you are on New Years Eve, there is a tradition of counting down to midnight and people hug and kiss each other and wish each other a “Happy New Year”.

In the USA, New Years Day federal holiday is on the 1st January each year however many Americans begin celebrating on December 31, New Years Eve.

New Year Day is often counted in and at the stroke of midnight people hug and kiss and wish each other a “Happy New Year”.

On New Years Day, families and friends will often gather for breakfast or lunch and celebrate the arrival of a new year.

The holidays with the biggest parties in the United States are New Year’s Eve and New Year’s Day.

New Year’s Eve is sometimes abbreviated as NYE, and it is always on December 31, the last day of the western calendar.

This is the most active celebration day across the entire country of the USA. Families throw parties, bars and clubs host large celebrations, and friends gather together to bring in the New Year.

New Year’s Eve is seen as the last day of the Gregorian calendar, which is based on events in the life of Jesus Christ, one may think that there would be a lack of uniformity in how it is observed. While there are other new year’s celebrations such as the Lunar New Year used in Asian countries and other such days celebrated in Southeast Asia, the “western” New Year is accepted throughout the world as a day off from work and a day to celebrate the next year. From the United States to Thailand to Denmark, December 31 is New Year’s Eve.

What to do on New Year’s Eve

Social gatherings are by far the most popular way to celebrate New Year’s Eve, with almost everyone having the day off. Friends get together at bars, clubs, hotels, and each other’s houses for parties. While not always, some sort of alcoholic beverage is usually involved with these parties. The drink of choice is champagne, but other sorts of drink are also enjoyed during this day.

Typically, these parties will show some of the world’s largest celebrations for the New Year. The favorite party in the US is held in Times Square, New York City, New York. This is always televised on the major networks and is hosted by a series of celebrity hosts. In addition to people watching the New York City party on TV, there will almost always be live music present at each party. If  there isn’t a live band, upbeat party music is played on a stereo or other sound system.

Fireworks are often the center of attention for New Year’s Eve Parties. Some people, depending on if it is legal in that particular state, will buy and shoot off fireworks on their private property. If these are not available, then people will gather somewhere to watch a fireworks show.

New Year’s Eve is a special holiday for students because they have had the previous 2 – 3 weeks off from classes. While they may or may not be around campus, the freedom associated with the end of December is manifested in the raucous parties that students typically hold or attend in their hometowns. Because of the long break from classes, many students return home to visit with family. Even if they do not spend the actual New Year’s Eve with the family, this day is also known as a special day to spend with family.

Besides parties, music, television programming, and fireworks, there are a few other things which are distinctly related to NYE. For instance, at the very end of New Year’s Eve, everyone counts down from 10 to 1, signifying the final ten seconds of the year. At the end of the count down, a lighted ball will drop from a tower. The origins of the ball date back decades, but it has been an accepted part of the New Year’s Eve celebrations for a long time.

Another tradition which is right in line with other American holidays is the food. Almost every restaurant will promote a sort of New Year’s Eve food special to entice people to buy from their restaurant for this day. Eating is one of the most popular activities at NYE parties, trumped by nothing except drinking.

One of the other popular traditions for New Year’s Eve is the airing of special additions of the best talk shows in the USA. David Letterman, Conan O’Brien, Jay Leno, Craig Ferguson, and others will all have special editions of their TV shows on New Year’s Eve.

While the previous activities listed have all been fairly secular in nature, there are a number of popular religious activities which are observed on this day. Some denominations of Christians celebrate Watchnight, a time of prayer and reflection at their local church. This tradition has been ongoing for hundreds of years traced back to the 18th century Moravians. Several denominations of Christian church or other religion will open for New Year’s Eve, in order to provide a place for its members to bring in the New Year with other similar-minded people.

New Year’s Day – The Day After

While most of the activities associated with the end of the year are focused on New Year’s Eve, there are some other traditions which are done on New Year’s Day. Always on January 1, this day marks the first day of the New Year. This is also the first day on which people will begin their New Year’s Resolutions.

The resolution is made on New Year’s Eve and is usually started the next day on New Year’s Day. Common resolutions include ways to lose weight, quit smoking, spend more time with family, write a book, travel to a foreign country, or other promises.

When is the next Federal Holiday or Celebration?