Veterans Day is an annual holiday in America honoring the millions of military veterans in the United States.

When is Veterans Day? Is it a Federal Holiday?

Veterans Day is both a federal and state holiday and is usually observed on November 11 each year.

In 1918, on the eleventh hour of the eleventh day in the eleventh month, the world rejoiced and celebrated because after four years of bitter war, the Allied powers signed a cease-fire agreement (an armistice) with Germany at Rethondes, France on November 11, 1918. This brought World War I to a close. November 11, 1919 was set aside as Armistice Day in the United States, to remember the sacrifices that men and women made during World War I in order to ensure a lasting peace.

On Armistice Day, soldiers who survived the war marched in a parade through their home towns. Politicians and veteran officers gave speeches and held ceremonies of thanks for the peace they had won.

November 11 is also celebrated as Remembrance Day or Armistice Day in many parts of the world. 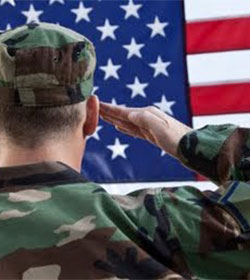 Veterans Day is both a federal and state holiday and is usually observed on November 11 each year.

In 1953 townspeople in Emporia, Kansas called the holiday Veterans’ Day in gratitude to the veterans in their town. Soon after, Congress passed a bill introduced by a Kansas congressman renaming the federal holiday to Veterans’ Day. Beginning in 1954, the United States designated November 11 as Veterans Day to honor veterans of all U.S. wars. In 1971 President Nixon declared it a federal holiday on the second Monday in November each year.

Veterans Day in the US

Dating back to the early 20th century, this honorable holiday is one of the most reverent days in the United States. Veterans Day is especially important now, due to the declining number of living veterans from World War I. Many Americans have grandparents who remember the end of the Great War, but few have great grandparents who were actually old enough to serve in the war.

Although the holiday originated from World War I, it is now celebrated to include all veterans of wars, conflicts, and active duty service. In the United States, the armed services community is very tight, and the Army, Navy, Marine Corps, Air force, National Guard and reserves of the US have been very important in shaping the country as well as the entire world.

🎖️Celebrations in the US for Veterans Day

Some of the celebrations for Veterans Day include holding special events for the veterans of each of the US’s major wars and conflicts. Some of these include the following:

The very first Veterans Day was held by then President of the United States Woodrow Wilson in 1919. When many of the troops returning from the war theaters of Europe, East Asia, Southeast Asia, and Africa had a shortage of food due to rationing, the President held a special dinner for them at the White House. The food of the evening was ravioli, which had just recently been introduced as an easy to make food, due to technological advances in the food industry.

Now, however, ravioli is not a common food to be eaten on Veterans Day. Instead, many people will visit special memorials set up to commemorate those who lost their lives in service for the country. Washington, D.C. for instance has numerous war memorials.

While some Americans have no direct connection with the wars of the past century, they enjoy the day off. All governmental offices are shut down, some schools are closed, and banks and businesses are closed. Mail is not delivered on this holiday either.

What to Do on Veterans Day

If you know someone who served in the army, the navy, the air force, the National Guard, or other branch of the armed services, it would be very respectful to give a small gift or card and mention how fortunate you are to have had the veteran serve and protect your country.

While most soldiers did not fight in the war in order to receive recognition, the support they get from normal citizens is what makes Veterans Day a true holiday in the United States.

Your Comments about Veterans Day

Have you got something to share about Veterans Day? Any comments or feedback welcome – please email your comments