Easter eggs were originally painted with bright colours to represent the sunlight of spring and after they had been painted, etched or decorated, were often given as gifts between romantic couples.

The egg is the symbol of fertility and new life, and the customs and traditions of using eggs have been associated with Easter for many centuries. The Easter egg is one of the most identifiable symbols of Easter.

Easter eggs are a lot of fun to color. The eggs were always enjoyed by children who would love decorating and playing games with them. There are also more games to play during the long Easter holiday, using Easter eggs. There are many variations of Easter Egg games to play. 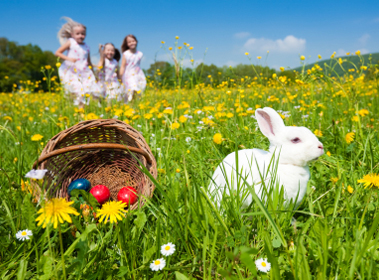 An easy way to separate egg hunters by age is by hiding the eggs at different levels and by different colors. This method allows all the children to enjoy the hunt together without getting in each others way. For example, all eggs below knee level are one or two colors. They are only for children under three years of age. Eggs that are between knee and waist level are for children from four to seven years of age. Those eggs should also be in specific colors that are only for that age group. Eggs at shoulder level, or higher, are of another color. These are only for older children to find.

This method works great and letting the younger children go first, with a longer period of hunt time, allows everyone a chance to have fun. Monitors are posted at key hiding points, to ensure everyone gets a fair chance. Winners are identified in several ways. The person finding the most eggs, in each age group, is the winner for that group.

A second game can held with the eggs collected by each person. The eggs for each person are weighed quickly by digital scale. The average weight per egg determines where that person is placed on the list. The contestant with the highest average egg weight wins a prize. This game evens out the fun for those that don’t collect a lot of eggs. As before, winners in each age bracket are identified.

Easter Egg hunts are over very quickly, you will need other games and activities for children to do. Our favorites are making egg hunter masks, before the big hunt, and the egg in the spoon race.

A plate of colored hard boiled eggs at easter a great idea and can be used for the “Egg-knocking game”. Everyone pairs up and each person then chooses an egg.

The two partners take turns tapping their partner’s egg with theirs. The first egg to crack loses and the winner goes on to challenge other winners until there is one egg left.

The child who makes the best Easter Egg hunt mask, also wins a prize. Each child is given two paper plates and come crayons. Each plate has the eyes cut out of the plates. The children draw faces on the mask, which they hold with one hand as they hunt. The main point of the game is the creativity each child uses in making their masque. The children are not required to wear the masque during the egg hunt.

After the judging of the Easter Egg Hunt Masks and the games with the eggs, the hunt and the weighing, comes a really fun game. We call it the Easter creativity run.

Children are grouped according to age. They are told that there are only two rules. They are to walk quickly from the starting line to a certain point a set distance away, a tree is a great turn around point. Once they reach the turn point they are to walk back quickly, without running, to the starting point. They will carry one of the eggs they found in the egg hunt, cradled in a spoon. If they drop the egg, they must stop, pick up the egg and keep walking quickly to finish the race.

During the race, perhaps one or two of the children will realize that since there are only two rules, they can hold the egg to the spoon with their thumb and complete the race the fastest. Nothing is said until all the different age groups have run the race. The winners are those that realized holding the egg to the spoon with their thumb was legal and not in violation of the rules. Of course, this all needs to be kept secret until after the end of the races.

There are also many other games you can have that involve the use of the colored Easter Eggs. There are games to see who can stack the most eggs in a pyramid – using your imagination you can probably think of some other great games to do with Easter Eggs.