Easter Sunday is commemorated to signify the resurrection of Christ in the Christian beliefs. It is celebrated as an entire weekend starting from good Friday when it is believed that Jesus died to Easter Sunday whose celebrations mostly spills over to Monday. Easter has over the years become a commercial festival with plenty of activity. Easter is celebrated on the first Sunday after full moon (paschal moon) that occurs next after the venal equinox around march 21st. Simply stated, it falls between march 22nd and April 25th, the dates varying from one year to another.

In USA, special church services blend together with festive celebrations on the Easter weekend. In New Yolk and indeed all other cities, Easter Parades are the order of the day where people show up in their thousands donning colorful outfits and trendy bonnets. The parade leader bears a large candle or a cross, signifying that Jesus defeated the cross and rose again bringing light to the world. Markets as well as homes are decorated with beautiful colors. The parades have over the years become a cultural event in America where participants stroll in a procession on Easter Sunday. Christians and non-Christians alike take part in the parades which are largely informal. Fifth Avenue in New yolk is synonymous with these processions which are eagerly looked forward to with participants looking glamorous in new clothes and hats. There is said to be an age old belief that having new clothes on Easter was a way to invite good luck for the rest of the year.

In following years other cities have developed their own version of Easter parades. They went as far as becoming tourist attractions in cities like Philadelphia, Boston, Coney Island and Atlantic City. Present day Easter parades are held in the named cities and almost any other and visitors often join the locals in marking the celebrations.

Easter marks the beginning of Spring 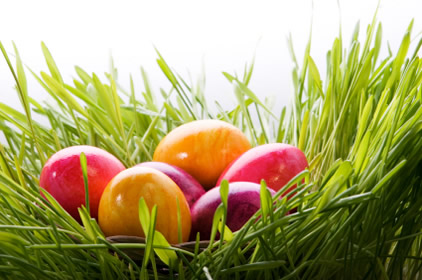 Age old festivities color every Easter calendar. In America Easter also marks the beginning of spring. Easter eggs are special eggs that are used to celebrate Easter. The eggs can be real hard boiled eggs or artificial ones. They symbolize the beginning of a new life, just as a new life is birthed from an egg when the chick hatches. They are painted or dyed in to different colors and may be hidden away in the fields for children to find. When boiling the eggs a tan can be attained by adding onion skins to the water. Present day egg hunts may contain mostly artificial eggs made of or filled with chocolate candies which can be hidden indoors and outdoors. After the hunt, presents are given to the ones with the most eggs, or the smallest and largest eggs collected. Egg rolling was also practiced in some regions where the eggs were released to roll down the hillsides. 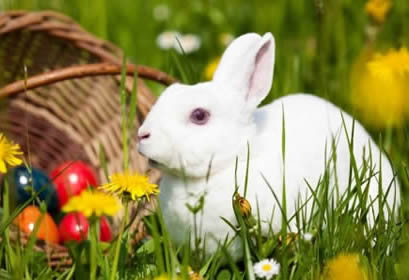 The Easter bunny or rabbit is another character that is synonymous with the Easter calendar in the USA.

It is depicted as the bearer of Easter eggs which it brings in a basket along with candy and even toys. Children are the lucky recipients of this gifts which they are told to go out and find.

Other symbols used to mark Easter are the Easter tree and the Easter lamb.

Churches all across the USA mark Easter by attending masses and church services. The clergy read the scripture on Jesus’ death and resurrection and remind the congregations the significance of what was done on the cross.

For many, Easter is the most important Christian festival. It celebrates the resurrection of Jesus Christ three days after his death on the cross.

During good Friday, most catholics hold a procession which is sometimes known as the ‘way of the cross’. The leader of the procession bears a large cross and may even wear a crown of thorns. Those beside him may whip him as a sign of what was done to Jesus during crucifixion.

Choirs sing colorful hymns with similar messages while in other churches skits and plays are composed.

When is the next Federal Holiday or Celebration?