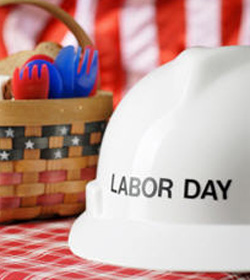 Labor Day is a United States federal holiday which is observed on the first Monday in September each year. The holiday originated on September 5, 1882 as the Central Labor Union of New York City sought to create a day off work for the working citizens.

Today the people of USA celebrate Labor Day with parades and community picnics. Many politicians “kick off’ their political campaigns by holding rallies on Labor Day. Most Americans consider Labor Day the end of the summer, and the beaches and other popular resort areas are packed with people enjoying one last three-day long weekend.

In addition to Labor Day being a general celebration for the end of summer, there are countless city and state festivals on this long weekend. Many of them involve water sports, but others have a focus on American football, as this is when the seasons begin. The NFL holds its first games on this weekend, and college football usually starts this same weekend.

Labor Day Weekend Activities | Things to do on Labor Day

Stone Mountain Park honors and appreciates our Everyday Working Heroes in a Labor Day Weekend celebration featuring the Lasershow Spectacular followed by an extended fireworks display on all three nights!

The Detroit Jazz Festival, the world’s largest (and best) free jazz festival in the world,

Enjoy everything from live music on the sand to craft brews in your hand, kids activities, surf event, ultimate frisbee tournament, corn hole and more.
The Jellyfish festival is true Musical Showcase. The location is perfect on the beach in Ocean City MD. The bands create a tapestry of music that will entertain, excite, and lead to the perfect day at the beach. This year we’ll be presenting some amazing artist you have heard of, as well what music lovers long for discovering that new band or artist to add to their playlist and favorites.

A gathering in a centralized location where cigar enthusiasts, brands, and lounges can interact and fellowship simultaneously in one space. With the creation of “Garchella” Cigar Music Festival, 5 Stakes Investment Group LLC, curated a signature, trade-marked event that will fill that void, not just annually, but throughout the year.  The “Garchella Cigar Music Festival” will take place outdoors on the west paddock of the Legendary Dallas-Fort Worth Southfork Ranch. Yes, you must be at least the age of 21 to enter the park.

Labor Day in the United States – Not Very Laborious Any More

The Labor Day Holiday in the US is celebrated by every student, worker, and non-worker. Its origins were based in the labor movement of the United States over one hundred years ago in a very different time for the country. Now, the celebration has strayed significantly from its original roots. Most activities nowadays have little or nothing to do with the original Labor Day from the 19th century. However, this does not stop many Americans from enjoying the day off with their friends and family.

When is Labor Day on the US Calendar?

Labor Day is always observed on the first Monday of September. This means that it is connected with the weekend before it, creating a three day weekend for most people who are employed on a regular Monday through Friday work week. Also, since it is in September, Labor Day usually marks the end of summer time. The beginning of summer in the United States is usually marked by Memorial Day in the month of May. However, the true beginning and end of summer do not land on these days.

Originally, the month of September was chosen by a prominent labor union in New York. The reasons for this are that there was a serious political movement among the working class people. This movement was critical of the way that certain labor protests were handled by the United States federal government.

Back in the late 1800’s, major corporations had worked their way into the upper ranks of the US federal government. This corruption caused great division among the American people of the day who watched companies get larger and larger while individuals often suffered through long work days and work weeks for little pay.

The increasing mistreatment of the workers by the corporations and the government that was operating together with the large corporations caused protests and riots among the people. These working class folks were then shut down at the hands of US Marshals and other peacekeeping units. In order to appease the growing class of working class Americans, President Grover Cleveland had this day introduced and passed within six days of the events leading to its necessity.

Today, most of the concerns of the labor movement have been dealt with to a level that is satisfactory to both sides. Celebrations for modern day Labor Day usually revolve around enjoying the last few days of summer. Labor Day marks the practical end of summer, since most students are returning to school, and most summer time locations like water parks and camps hold their final weekend being open for service.

USA » When is Labor Day 2021? Things to do on the Labor Day Weekend